Kolín for the 80th anniversary of Deportations 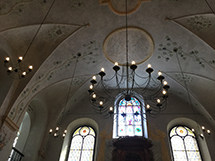 Join Rabbi Dr Andrew and Sharon Goldstein in the Czech Republic to mark the 80th anniversary of Deportations of the Jews of Kolín.  The full programme is as follows but individuals should make their own arrangements and decide on how long they would like to stay.

Morning in Prague then by train to Kolín (Hotel Theresia)

Commemoration of 80th Anniversary of Deportations

10am Welcome by Mayor in Kolín Town Hall

12 midday Walk to the school where all Jews had to gather and were incarcerated for three days before deportation. Ten years ago, our community was in Kolín and unveiled a plaque at this site commemorating the school children who were deported. Afterwards, we will walk to the minor rail station from where the Jews of Kolín and other local towns like Podebrady were transported to Terezín.

1:15pm Return to the town centre for lunch and visit the ghetto and other Jewish sites

Travel by coach to nearby Podebrady to dedicate a memorial at the Luxor home, a Jewish Care home for elderly survivors of the Shoah. After lunch visit the castle and other sites in this spa town.

Return home or back to Prague for more sightseeing.

For more information or to express an interest contact Rabbi Andrew Goldstein via the Synagogue Office.

This website uses cookies to improve your experience while you navigate through the website. Out of these, the cookies that are categorized as necessary are stored on your browser as they are essential for the working of basic functionalities of the website. We also use third-party cookies that help us analyze and understand how you use this website. These cookies will be stored in your browser only with your consent. You also have the option to opt-out of these cookies. But opting out of some of these cookies may affect your browsing experience.
Necessary Always Enabled
Necessary cookies are absolutely essential for the website to function properly. These cookies ensure basic functionalities and security features of the website, anonymously.
Analytics
Analytical cookies are used to understand how visitors interact with the website. These cookies help provide information on metrics the number of visitors, bounce rate, traffic source, etc.
Functional
Functional cookies help to perform certain functionalities like sharing the content of the website on social media platforms, collect feedbacks, and other third-party features.
SAVE & ACCEPT
Powered by