Think.
With an open mind

You can watch a recording of this sermon on our YouTube channel.

The selection of verses from the book of Amos (2:6-8, 3:1-2, 5:7,11-15,23-24), which we read as our Haftarah this morning, makes reference to several of the laws that are found in our Torah portion this week: “If you lend money to My people, to the poor among you, do not act toward them as a creditor; exact no interest from them.” (Exodus 22:24) and further “If you take your neighbor’s garment in pledge, you must return it to him before the sun sets; it is his only clothing, the sole covering for his skin. In what else shall he sleep? Therefore, if he cries out to Me, I will pay heed, for I am compassionate.” (Exodus 22:25-6)

Amos and our Torah are clear that we have an obligation not to exploit the poverty of our fellow human beings. And our Torah portion goes even further when it discusses the rules of judicial conduct, saying: “You shall neither side with the mighty to do wrong—you shall not give perverse testimony in a dispute so as to pervert it in favor of the mighty—nor shall you show deference to a poor man in his dispute.” (Exodus 23:2-3)

I was reminded of these two verses, which warns us that justice requires the equal treatment of the rich and the poor, when I listened to the food poverty campaigner Jack Monroe on the radio this week.

In a twitter thread gone viral[1] and picked up by radio and print journalists, she highlighted that the consumer price index (CPI), which is used to measure the rising price levels of groceries and household goods across the UK, grossly underestimates the true cost-of-living crisis affecting the poorest members of our society. To pick just one example, the cheapest rice available at Jack Monroe’s supermarket was last year “45p for a kilogram bag. Today it’s £1 for 500g. That’s a 344% price increase”[2] hitting the poorest and most vulnerable households. In contrast, looking at an upmarket ready meal costing £7.50 today, as it did ten years ago, “if the price of that had risen at the same rate as the cheapest rice in the supermarket, that £7.50 lasagne would now cost £25.80.”[3]

When I heard Jack Monroe speak, I felt ashamed. I had to admit to myself that I had no idea how much the cheapest rice, the cheapest pasta, or any of the other items in the value range at my supermarket cost. I wouldn’t ever think of buying them. Like so many in our society, and I am sure the politicians of our country included, I had no idea just how unequal the effects of inflation are distributed. Yes, it’s true that my plane tickets, my nice holiday and the lovely meal that I get to enjoy out every so often with Josh, have also seen greater than average increases. But these are luxuries! My standard food expenses in contrast have increased only marginally, while those who must count every penny when buying food are hit by price increases far exceeding the consumer price index.

What would Amos have to say about that? Well, for our Haftarah I skipped the harsh punishment that God threatens but let me just pick one verse to illustrate the point (Amos 4:2): “The Lord God has sworn by God’s holiness, “Behold, the days are coming upon you when they will take you away with meat hooks, and the last of you with fish hooks.”

As I was reflecting on the shame that I was feeling, I kept wondering how it was possible for me to be so blind to the facts that were available to me right in front of my eyes on the shelves of my local supermarket. I think of myself as a person who cares deeply about justice, about using my privilege to support those in society who have the least; and yet, even I am wandering through this world with my eyes closed to the reality that so many are facing in our society.

The late German Jewish political philosopher Prof. Hannah Arendt writes in her book On Revolution: “the predicament of the poor after their self-preservation has been assured is that their lives are without consequence, and that they remain excluded from the light of the public realm… they stand in darkness wherever they go.”[4]

As my friend and colleague, Rabbi Dr. Judith Rosen-Berry, who pointed me to Arendt notes: “With poverty comes a sort of oblivion – a disappearing. They are overlooked – except for somewhat and very partially meeting their material needs. It’s tricky,” says Judith, “but I think that [Arendt] makes the really important point that ‘poverty’ stands in the way of the poor being able to create the public realm/worlds. Or that material need ‘is a state of absence that undermines the subjective capability’ or political/social capacities of the poor. Poverty not only damages bodies but it damages the building of the public realm or democracy. Poverty makes people spend all of their time earning their living and denies them the opportunity to be active in the ‘public space’. The poor do not have the ‘freedom’ that is necessary to shape their wider context. Poverty is fundamentally undemocratic.”[5]

Remember what the Torah taught us about justice? “You shall neither side with the mighty nor shall you show deference to a poor person.”

We are clearly failing miserably. We must open our eyes. We must demand more fairness. We should challenge supermarket chains to apply price increases fairly!

But I think we must do even more than demand that high-end rice increases in price at the same rate than low-cost rice. If we want to be able to live up to the Torah’s demand for equal justice for all irrespective of their wealth, we need to take account of Arendt’s observation that the poor “remain excluded from the light of the public realm.” If the poor do not have the same political power as we have, we must demand equity not just equality.

There is a famous cartoon by the artist Angus Maguire, which beautifully illustrates the difference between equality and equity. Thanks to our modern technology, I can show you the cartoon rather than only having to describe it. 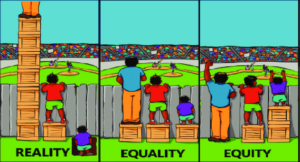 From the cartoon it is clear that, if we want to give everyone the chance to look over the fence, it takes more than treating everyone equal: we must apply the principal of equity because not everyone starts out from the same reality.

The truth is that those who can afford high-end products, can afford to pay a greater share of the price increases than the most vulnerable in our society. Let us heed Amos’ warning: Let us not sell the needy for a pair of sandals or trample the heads of the poor into the dust of the ground.

Let us call on our politician to open their eyes to the inequality of the current cost of living crisis. And let us demand equity and not just equality. For that is how we can ensure that, in Amos’ words: “justice will well up like water, righteousness like an unfailing stream.”

Ken yehi ratzon – May this be God’s will.

This website uses cookies to improve your experience while you navigate through the website. Out of these, the cookies that are categorized as necessary are stored on your browser as they are essential for the working of basic functionalities of the website. We also use third-party cookies that help us analyze and understand how you use this website. These cookies will be stored in your browser only with your consent. You also have the option to opt-out of these cookies. But opting out of some of these cookies may affect your browsing experience.
Necessary Always Enabled
Necessary cookies are absolutely essential for the website to function properly. These cookies ensure basic functionalities and security features of the website, anonymously.
Analytics
Analytical cookies are used to understand how visitors interact with the website. These cookies help provide information on metrics the number of visitors, bounce rate, traffic source, etc.
Functional
Functional cookies help to perform certain functionalities like sharing the content of the website on social media platforms, collect feedbacks, and other third-party features.
SAVE & ACCEPT
Powered by